Modeling the Covid-19 and its global invasion 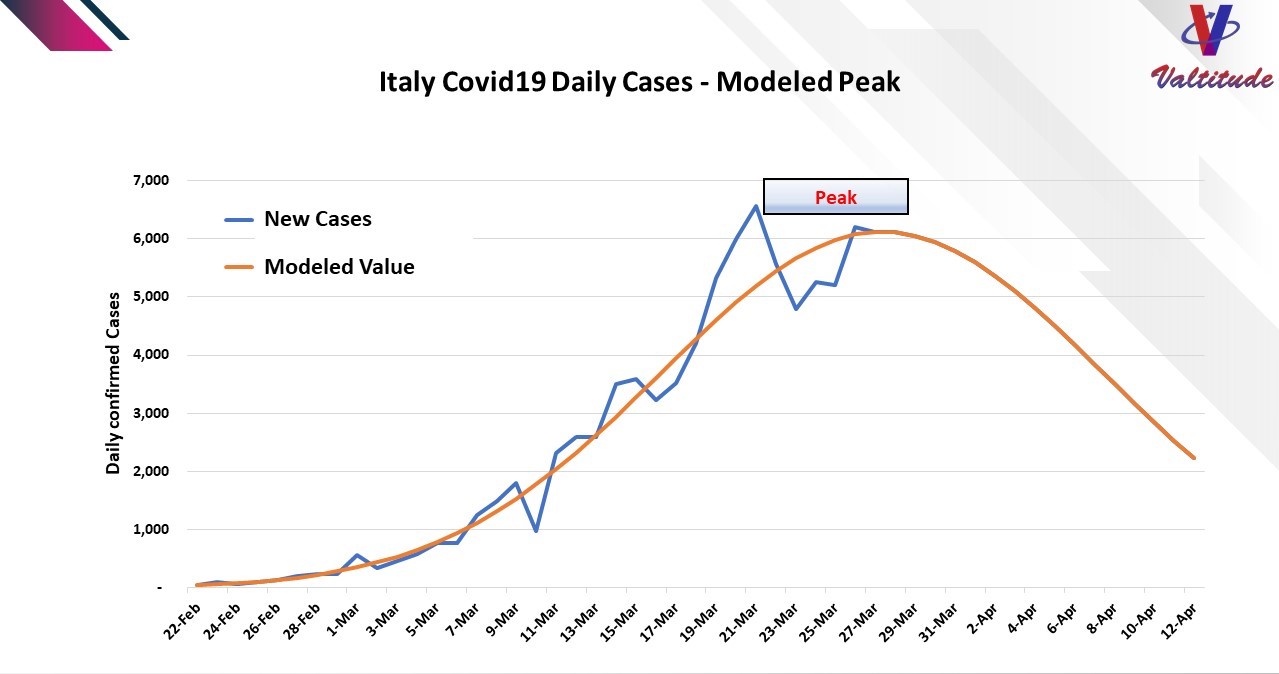 Modeling the Covid-19 and its global invasion

The World has entered an unusual period in modern times - a large scale epidemic that is spreading like wildfire across the globe and leaving economies in shambles along with lost lives in a short period of time. Covid-19 imported from China into Europe and the Americas has already shut down many aspects of modern life - travel, aviation, cruises and any meaningful pursuit of creating value...

The current debate that started this week is something philosophical and pits thought leaders and ideologists:

Regardless, the key input to this when does the epidemic peak and perhaps when would it fade away assuming the current level of shut-downs and containment efforts. Until then, the fear of the unknown will cause more panic and turbulence in both economic and emotional lives.

China had the virus from late November until early March. The infection became widespread and out of control sometime in January but peaked in late February.  Today China does not have any new cases and they may be Corona free in a few days.

Modeling the peak occurrence gives us a sense of how long the epidemic will last and what is the optimal response to achieve the peak sooner so we can taper off and emerge stronger and back to normal lives.

South Korea did a fantastic job of containment.  The cases peaked between day 9 and day 12 and has come down dramatically since then.  Entering day 32, South Korea just identified 64 new cases on Monday March 23, 2020.

Italy is on the other extreme where the containment was sparse. The death toll has surpassed even China's although the total number of reported cases is smaller as of date.

With very little containment efforts and a healthcare system struggling to cope up with the demands of the Covid- 19 patients, the country is the worst hit from this global pandemic. However, our models show that even Italy is about to peak in the number of new cases added daily.

Spain also shows that the peak will be hit close to Day 35 in a similar path to Italy. Iran seems to have entered its peak period already. Despite the criticisms against Italy, it looks like the worst of the epidemic is over for Spain, Italy and Iran now they need to deal with the number of critical cases towards cure and healing......

The path to the peak occurrence of Covid- 19 for other European countries and the United States is not so clear.  Germany, Switzerland, France and UK are experiencing consistent growth in new cases either because of lack of testing or discipline in containment.

State of the United States

The number of cases in the United States is exploding largely due to New York which leads the pack in the number of new cases added daily at about 10K per day and counting. New York is reporting about 30% of those tested daily turn out to be positive.

To its credit, New York is the only state that has conducted the most number of tests though it is also hobbled by the fact this is the Gateway to America and is the center of commerce and international travel. It has added about 5,700 cases on Monday alone this week.

The bright side of this news is the state of Washington, the earliest state to report the Corona virus cases. It looks like Washington has hit a plateau and the number of cases may be coming down in the next week or so and perhaps be virus free by mid-April. The rate of infection is estimated at 6% of those tested in the state.

It looks like we need to investigate the model followed by the state of Washington to see if that can be emulated in California and New York, two of the most populous states in the Union.

Below is how the infection rates look in Massachusetts. Massachusetts has started a state-wide shut-down order beginning Tuesday afternoon. Perhaps the containment efforts will pay off as the percent infected is between 8% and 10% over the last week.

I look forward to providing further updates as we get more data in the next few days.